Anyone who has had at least the curiosity to research the anime Hunter x Hunter will surely come across a confusing order of episodes, which were further complemented by movies, theater musicals, and OVAs (Original video animation – animation format with few episodes, released directly on video, without prior showing on television or in the movies).

To put an end to this doubt, let’s explain here the two possible orders to check the anime (and why there are two orders), including all the different adaptations of the manga’s story and information about which episodes of each version of the anime compose. the arcs of the plot. 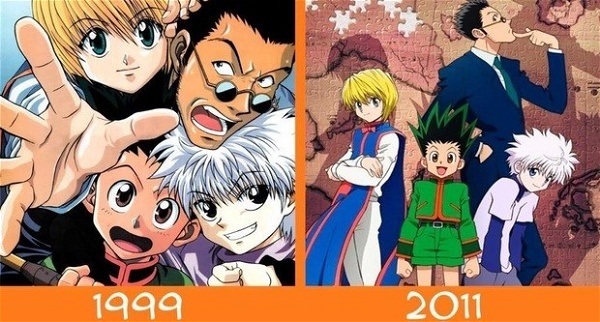 The choice of which Hunter vs. Hunter to watch will depend on the viewer. What is important to understand is that the two animes are versions of the same story told in Yoshihiro Togashi’s manga.

However, the 1999 version only had 62 episodes, as it ended up reaching manga at the time. In addition, fans who followed the anime during this period even got a musical and three OVAs to check out, two with 8 episodes and one with 14. Continuing the story, these OVAs can be considered part of the 1999 version of Hunter x Hunter .

The 2011 version, in turn, advanced much further in the story, given the advance of the manga as well. This release includes the acclaimed Chimera Ant bow. Although without OVAs to check out together the 148 episodes, the anime won two films in that period.

The choice of which version and order to follow, therefore, is up to the viewer, who can even opt for a combination of the 1999 anime, a more classic version, with 2011 one, with more modern graphics.

The first order suggested is watching the 2011 anime. If the future Hunter X Hunter fan decides to start with this version, he or she won’t have to worry about OVAs. However, there are movies! Check it out below: 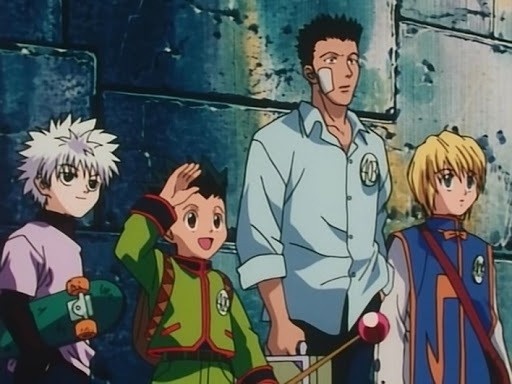 The second order in which Hunter vs. Hunter can be seen unites the two versions of the anime. Since the story is the same and the animes are extremely similar, it’s possible to start checking out the classic version, then moving on to the most current one.

As with other manga, Hunter vs. Hunter has its plot divided into arcs, storylines that are told during a certain number of episodes.

As there are two anime adaptations of the manga, each of them has arcs in different episodes. In addition, the two animes have already been completed, while the manga is still being published (although with increasing gaps). Meet the bows! 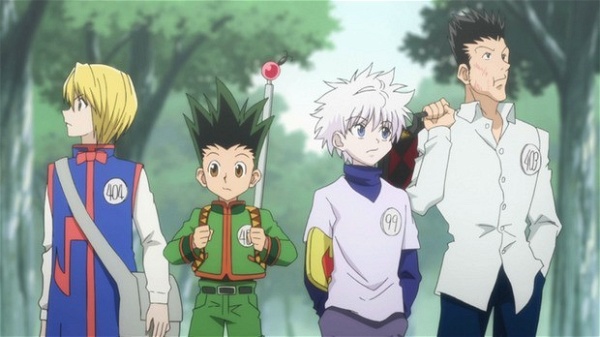 Young Gon dreams of becoming a hunter. To do so, he undertakes a series of strange and difficult tests, such as walking through a deadly jungle, hunting other candidates, killing a wild boar, facing an extraordinarily long underground marathon and even making sushi.

It is during this exam period that Gon befriends Kurapika, Killua and Leorio, other candidates for the role of hunter. In these episodes, we also meet the antagonist Hisoka. Also one of the candidates, Hisoka is a complex young man who sees Gon as just one opponent to kill as soon as he gets the chance. 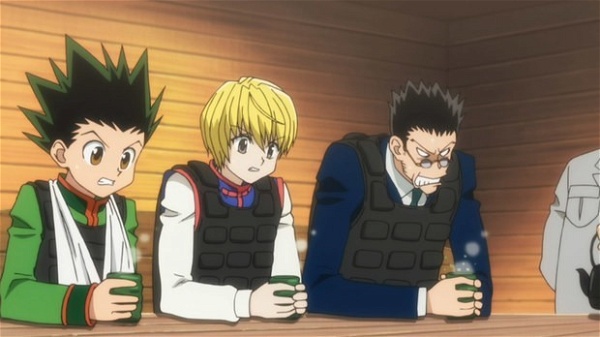 Gon, Kurapika, and Leorio pass the exams to become hunters. After that, they set out on a new adventure to free Killua from his parents’ mansion on Kukuroo Mountain. The young man ended up being expelled from the exam by his brother.

After the rescue, each of the group members decides to take a different path. Leorio goes to medical school to become a professional doctor. Kurapika sets out to become a bounty hunter. Gon and Killua go to Heavens Arena to gain combat experience by training. 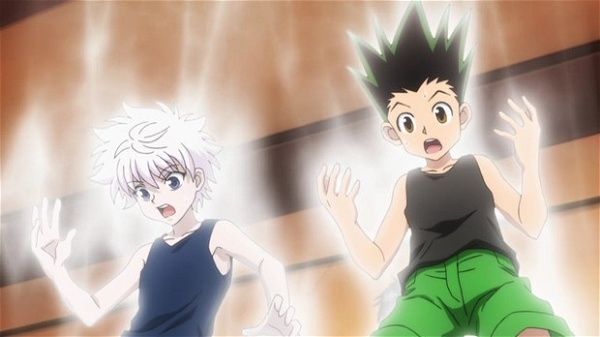 Gon and Killua arrive at Heavens Arena. The venue is a 251-story building where different fighters compete in cash fight tournaments 24 hours a day.

There, the pair meet the master Wing Kung-Fu. He teaches Gon, Killua, and a child named Zushi about the Nen energy, a chi-like energy that can be used to manifest superhuman powers. With the teachings of the master, the three start to fight in the tournament to gain money and experience.

To Gon’s surprise, Hisoka is also in the tournament, which turns out to be the perfect occasion for a new confrontation between the two opponents. 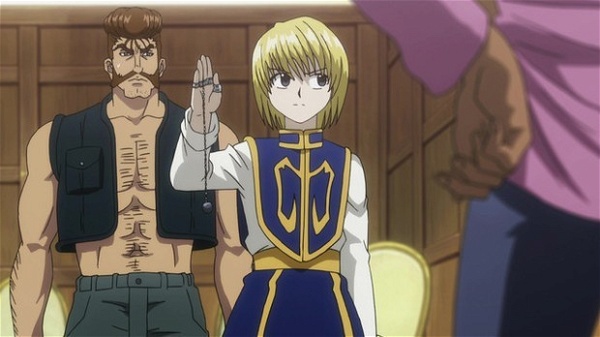 Gon, Killua, Leorio, and Kurapika meet again to participate in the biggest auction in the world in the metropolis of Yorknew City. In this context, Gon, Killua, and Leorio try to earn money in different ways to be able to buy the video game Greed Island, which could help Gon find his father.

Kurapika, on the other hand, works as a bodyguard for Neon Nostrade, a meat collector and the daughter of the head of a Mafia family. He tries to approach his clan’s Scarlet Eyes, which will be auctioned in the same city. Meanwhile, the group of thieves who killed Kurapika’s clan, called the Ghost Troopers, are also gathering in the city. 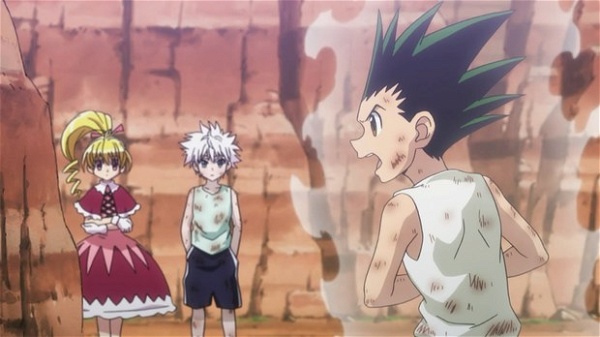 Gon, Killua and Leorio return to help Kurapika recover after the battle with the Phantom Troupe. Leorio and Kurapika depart again, and Gon and Killua have the opportunity to join a team hired by billionaire Battera.

After joining the team, Gon and Killua train Nen with experienced master Biscuit Krueger, a 57-year-old woman who looks like a 12-year-old girl. When a player nicknamed Bomber starts blowing up other players, Gon, Killua, and Biscuit team up to fight it.

The Phantom Troupe also travels to Greed Island looking for a Nen remover to remove the Nen blade Kurapika placed on Chrollo Lucifer to nullify his powers. 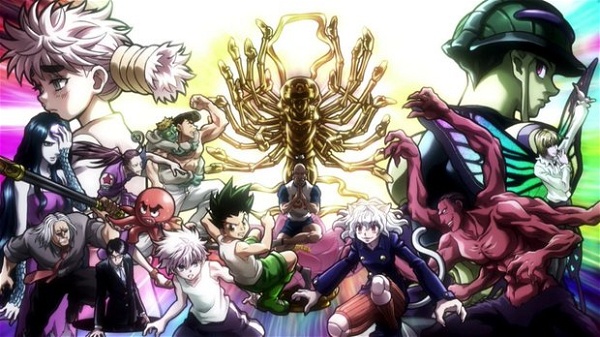 After leaving Greed Island, Gon and Killua meet Kite. The three are all hired to investigate a strange mystery: an insect leg that has appeared on the beach. Genetic tests reveal that the leg belongs to an abnormally large Chimera Ant Queen. She happens to be on the coast of an island called NGL (Neo-Green Life).

Before Gon, Killua, and Kite arrive at the site to stop the ants from proliferating, the chimeras wipe out most of the island’s population and spawn hundreds of offspring for the next generation. 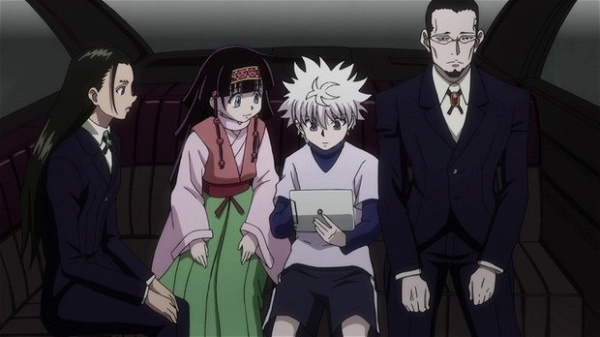 After a confrontation with the king of the ants of Chimera, Meruem, the president of Hunter, Netero, passed away. The zodiacs gather to make a new election to choose the new president of Hunter. Ging Freecss, one of the Zodiac members, is leading the establishment. Upon returning, Leorio ends up gaining prominence as one of the main candidates in the elections.

Meanwhile, Killua and his minions use Alluka Zoldyck’s Nen ability to try to save Gon, who remains hospitalized. Concerned about the potential dangers that the use of Alluka’s powers poses, Illumi and Hisoka try to stop Killua.

8. Expedition Arch to the Dark Continent

Sponsored by the Kakin Empire, the son of Isaac Netero, former president of Hunter, launches an expedition to the forbidden Dark Continent. Pressed by V5, the remaining Zodiacs try to stop him. To do so, the group recruits Leorio and Kurapika to help. 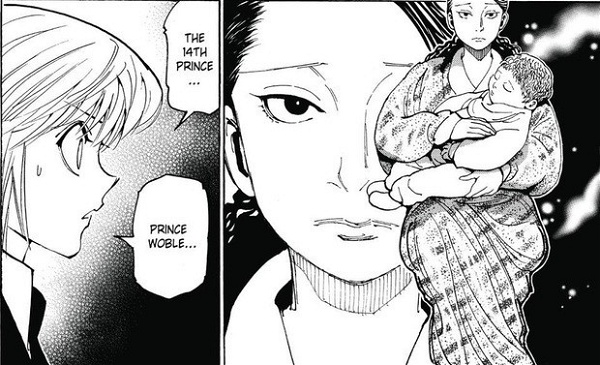 The 14 princes of the Kakin Empire must kill each other in a terrible battle as the Black Whale leaves for the Dark Continent. Kurapika has been hired by the eighth queen, Oito Hui Guo Rou, as a bodyguard, but becomes involved in the situation while trying to get closer to the last owner of her clan’s eyes, Prince Tserriednich.