Roronoa Zoro, Pirate Hunter, master swordsman, one of the 11 pirates that make up the so-called “Worst Generation”, great friend of Luffy, responsible for some of the best action scenes in One Piece and, for sure, for some of the best comic moments . Over the course of the 20 seasons of the anime, Zoro has won the hearts of Straw Hat Pirates fans. 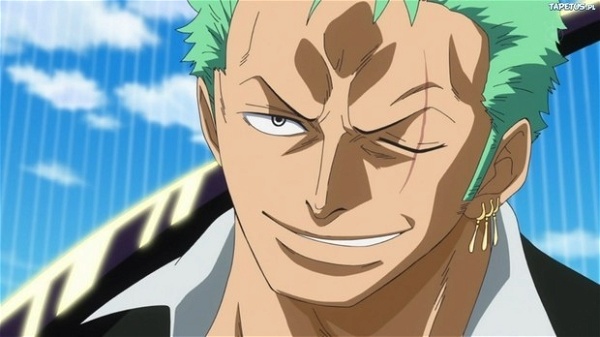 We meet Zoro at the beginning of the anime, as a criminal prisoner of the marines, while he awaits his execution. After being saved by Luffy, however, he decides to accept the pirate’s invitation to join his crew, being the first member of the group formed by the Straw Hat Pirate.

Since then, Zoro has come to be mistaken for the true captain of the crew, given his strength, his skills with his three swords and his more serious manner. He, Luffy, Sanji and Jinbe are considered the four best fighters on the team , which only highlights their efforts to one day become the greatest swordsman in the world.

The warrior eventually became known as one of the 11 pirates of the so-called “Worst Generation” who arrived in the Sabaody Archipelago before the Battle of Marineford. They all became known as Supernovas, pirates who, although they are novices, already have a bounty in excess of $100,000,000, due to their daring actions against the World Government. Currently, Zoro has a reward of $320,000,000 .

The dream of being the best swordsman and his traumatic past 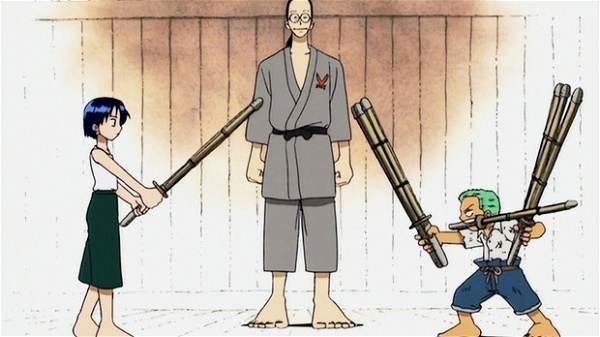 From the first moment we see Zoro, we are told that his life’s dream and great goal is to become the greatest swordsman in the world one day. But this commitment originated when the warrior was still a child, in a promise made to a friend.

While trained in Shimotsuki village in her childhood, Zoro already demonstrated enough strength to beat adult swordsmen in different dojos. In one of these dojos, however, the sensei makes a deal with him, saying that if he can’t beat his daughter, Kuina, he should train at the dojo. To Zoro’s surprise, he wasn’t able to beat the girl, and started training on the spot.

After 2000 losses for the girl, using only training swords, Zoro suggested a new dispute with real swords, but lost again to her friend. As he cried in frustration, Kuina told him that she also dreamed of becoming the best swordsman, but regretted that she could never achieve such a feat, as, according to her father, the fact that she was a woman would cause her skills to diminish as she matured. . Annoyed, Zoro made her promise that they would both train to achieve this dream until one of them did.

Unfortunately, Kuina fell down the stairs of the dojo the next day and died. In mourning and deeply shaken by his friend’s never having had the chance to fulfill his dream, Zoro started to face as a mission one day to become the best swordsman in the world.

The three swords of Zoro

After Kuina’s death, Zoro asked Koshiro, the girl’s father and her sensei, to give him the family sword, Wado Ichimonji. From there, the swordsman began to train his Santoryu technique, in which he uses the three swords he always carries with him, with two of them ranging from new weapons, but always in possession of Wado Ichimonji.

Currently, the three swords that Zoro uses are:

The Mystery and Theory About the Left Eye 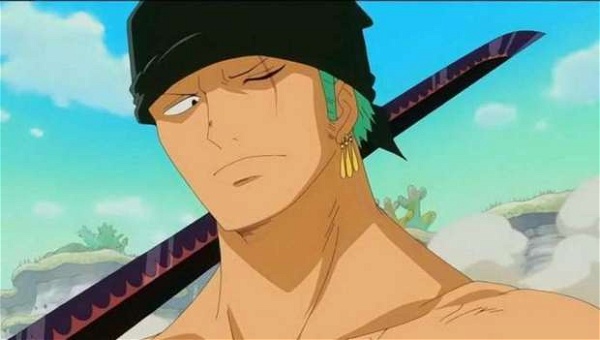 Since One Piece returned from the timeskip, fans have been surprised to see that Zoro had a new scar: a large scar on his left eye, now permanently closed. The curious thing is that, so far, the anime still hasn’t addressed the reason for the injury, and not even the other characters asked questions.

The mystery, of course, caused fans to create several theories about the subject. And one of them gained popularity because it apparently made a lot of sense. For some fans, Zoro has a demon inside him, and he cut his own eye (or let Mihawk, with whom he spent two years training, cut) as a way to control that demon. But let’s get to the explanations. 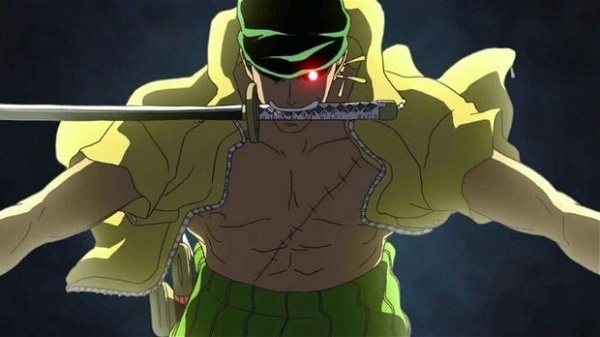 In Enies Lobby , Zoro attains his Ashura form for the first time, a technique in which he is temporarily left with six arms and three heads, similar in form to the Ashura entity. But there is another quirk in his appearance when using the technique: his left eye glows red.

And the idea that the swordsman has a demon inside is even stronger when we remember that now one of his three swords is the Sandai Kitetsu. Cursed, this sword killed all of its former owners, except Zoro, whom the artifact seems to have accepted as “master”.

Some even bet that Zoro hasn’t lost his eye, but that when he uses it again, it will allow Ashura to see through him.

Considered a warrior of strength and abilities equivalent to those of Luffy, protagonist of the anime, Zoro owes the development of his talents to the heavy training he had since his childhood, in the Kiuna family dojo and, later, with the swordsman Dracule Mihawk.

In addition to his super strength, his impeccable precision in his sword strokes, unbelievable speed and agility, endurance, and his greater control over each of his abilities as the episodes progressed, Zoro also developed specific techniques with his three swords. 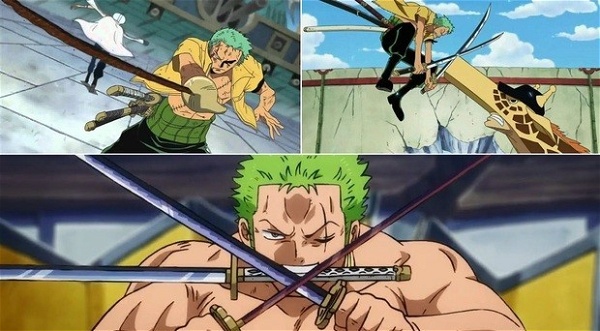 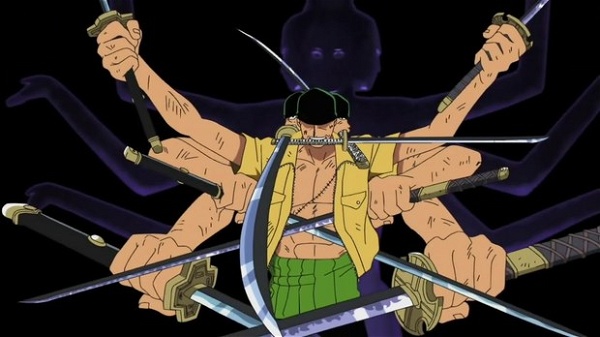 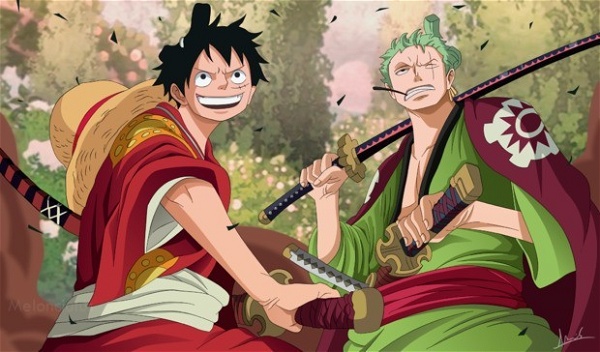 Although Zoro demonstrates several other skills, sense of direction isn’t one of them. It’s quite common to see him in comic scenes, being able to get lost even in straight paths.

At first, Zoro looks like a serious warrior, with a distant and reserved way. However, it is common to see him being a bit silly and exaggerated expressions when he loses his temper. It’s exactly this comicity in a character so serious that it takes fans by surprise and makes him one of the most beloved characters.

Although he doesn’t show his emotions much, Zoro cares intensely for his crewmates, always willing to protect them at any cost. He has risked his life multiple times in battle, even absorbing all of Luffy’s pain in a fight, to save his captain’s life.

Yes, Zoro has killed before, and is capable of showing no mercy when in combat with an enemy. However, the swordsman always tries, for example, to use the bladeless side of his swords if he is fighting weaker people, so as not to hurt them. Besides, he’s already risked his life to save people he didn’t even know.

During Shōnen Jump magazine’s first 4 polls, Zoro was ranked second among the most beloved characters by fans. In a survey done by Oricon Inc., the swordsman appeared as the 4th character that fans most wanted to win a spinoff series.